Think all water filter pitchers are created equal? Think again. Some could be letting harmful toxins into your drinking water. 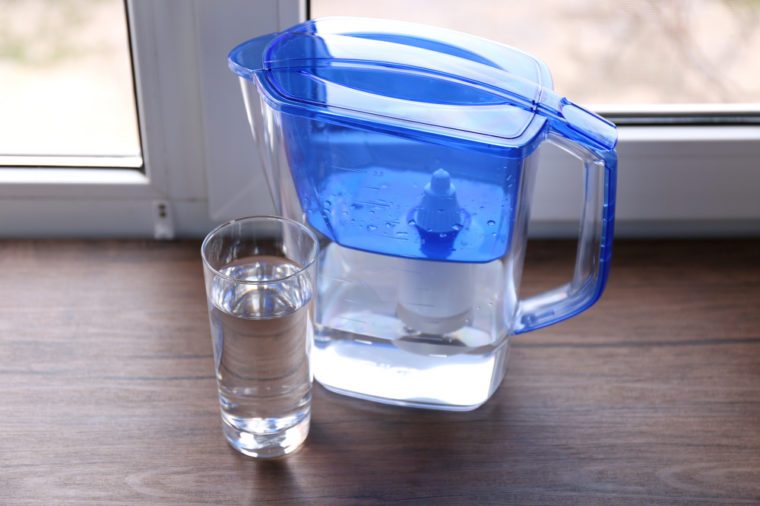 Africa Studio/ShutterstockThey say “slow and steady wins the race,” and when it comes to water filter pitchers? Turns out they’re right. A recent study out of The Ohio State University revealed water filters that work too quickly may be letting harmful toxins get through to your drinking water (and you won’t believe what toxins might be in your drinking water!).

For the study, published in the journal Water Science Technology: Water Supply the scientists compared three popular pitcher brands for their ability to clear “dangerous microcystins” from tap water. Microcystins are a common group of algae found in calm waters like reservoirs, according to the U.S. Environmental Protection Agency, and they can sicken or kill people and animals who drink water contaminated with them.

“Toxic cyanobacterial blooms are a global threat to human health due to contamination of drinking water,” according to the study. “To ensure public safety, water treatment plants must have the capability to remove [them] from water. Recently, however, there have been several instances when [they’ve] been detected in tap water.” With that in mind, the scientists extracted microcystins from Lake Erie, diluted them in tap water, and then subjected the tap water to three different water filter pitchers, each of which is readily available on the market.

It turned out that the pitcher that took the longest to filter the water—it uses a blend of activated carbon—effectively decreased microcystins to below detectable levels. The pitcher that filtered water fastest—using coconut-based activated carbon—removed 50 percent or less. Lead study author, Justin Chaffin, PhD, the research coordinator for Ohio State’s Stone Laboratory, believes that when water is passing through carbon, “contact time really seems to matter.” In the study, contact time ranged from two minutes per liter (in the worst-performing pitcher) to six minutes per liter (for the best). The middle-of-the-road pitcher took about four minutes per liter.

The researchers didn’t name brand names, according to EurekAlert, but when deciding which pitcher to buy, you can compare individual pitchers based on the speed of percolation and the kind of carbon used in the filter. In addition, Dr. Chaffin hinted that the cheaper the water filter pitcher, the worse it might be at filtering microcystins. Also, even though the study shows certain water pitchers are effective, the researchers caution against using any water source known to be contaminated. A far safer solution would be to switch to bottled water in that case.